Instant Dedicated DDoS Protection is capable of mitigating all types of DDoS attacks, targeting any type of online service.
We block DDOS attacks from Layer 4 to Layer 7 and we constantly update our filters to also block the latest threats.
Our DDOS protection blocks attacks up to 1 Tbit / second and can filter 700,000,000 packets-per-second.

We offer one of the cheapest DDOS protection available in Europe

Our DDoS filtering protects from floods up toÂ 1 Tbps in size!

A Distributed Denial of Service (DDoS) attack is an attempt to make an online service, like a website or gameserver, unavailable by overwhelming it with a high amount of traffic from multiple sources. DDoS attackers target a wide variety of online resources, from banks to news websites to game servers. They present a major challenge to publishing and accessing information online.

Instant DedicatedÂ offers a very affordable solution to protect your server from DDoS attacks. FromÂ onlyÂ â‚¬99,00 per month (per IP) you can receive up toÂ 700,000,000 packets-per-second orÂ 1 Tbit/sec of DDoS protection. The amount of DDOS protection we provide is not dedicated entirely to you, but is a pooled resource that all protected customers share in in our location.

What type of floods do we protect?

GET YOUR PROTECTION TODAY

Does your DDOS protection really work?

An Instant Dedicated customer running a global dating site, started getting a 220 Gbit / second attack after some media attention. The attackers had no problem sendingÂ around 86 million packets per second to their site. Luckily, our client took the extra effort on getting decent DDOS protection from us and we had no problem keepingÂ him online.
(the image below is an example from that past. Our current DDOS protection capacity lays today around 1 Tbit/second) 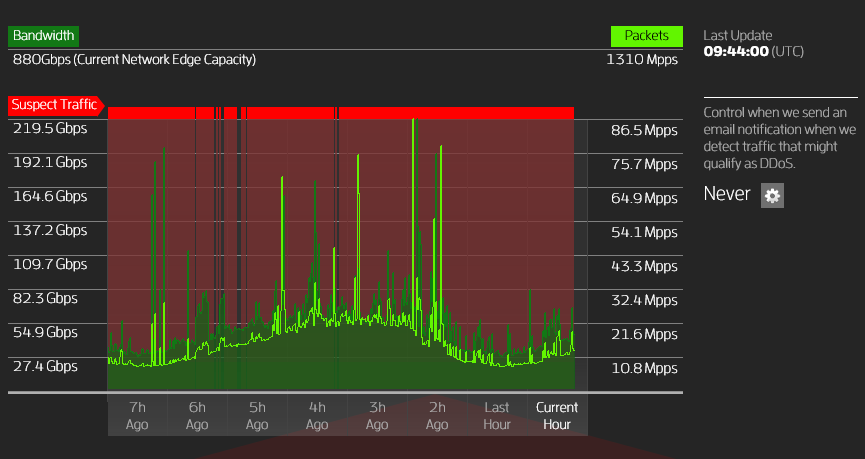 Is your current DDOS protection able to do block this?

How do we differ with other DDoS protection solutions.

GET YOUR PROTECTION TODAY
ď»ż